DECT offers a variety of benefits over WiFi and cellular wireless phone networks. Spectralink DECT wireless phones are available in many different models, ranging from office handsets to industrial-class handsets. To integrate any of these Spectralink DECT phones into an existing PBX, the handsets require a Spectralink server to interface with the telephony network. In between the server and the handsets, there may be switches, base stations and repeaters installed to support additional handsets or to increase the wireless range of the system.

For this mock system, the server has been scaled to support a larger system, connected to the server by a single switch.

The switch connects the server to the base stations. The server, in turn, connects to the PBX (Fig. 1). This Spectralink IP-DECT Server 400 mock system will look something like this:

The Spectralink IP-DECT Server 400 is a popular choice for small- to medium-sized businesses because it can be easily scaled to support up to 30 DECT handsets and 12 concurrent calls through handset licensing. It is deployable in an office or warehouse, or a hybrid of the two environments. The server is integrated with an existing PBX and features support for SIP. The IP-DECT Server 400 can receive power via either an external power supply or PoE.

Deploying multiple base stations in an area with heavy phone use is ideal to ensure all voice channels are clear. For example, the green base stations in Fig. 2 may be in an office or call center, or perhaps in a busy warehouse or manufacturing facility.

For an area with less handset traffic, only one base station may be required. If the area is more spread-out, connect a repeater to the IP-DECT base station to ensure the signal quality remains strong (Fig. 2). The DECT wireless repeater does exactly as its name suggests—it “repeats” the signal from the base station. Repeaters require an external power source, since PoE cannot travel from the switch to the IP-DECT base station, and then to the repeater. One Spectralink DECT repeater can support between 2 and 4 concurrent calls and has a range of up to 164 feet, indoors. They are also wall-mountable and can be provisioned with an external antenna for extended range. 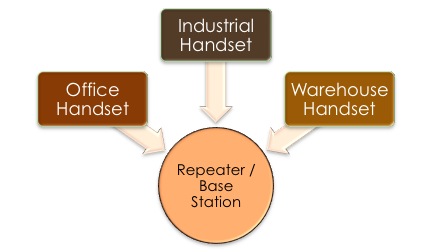 Spectralink DECT handsets are available in a variety of formats that can operate off of the same base station and server system (Fig. 3). Choose a colorful, user-friendly model for the office, and deploy a system of rugged, industrial-strength models for the warehouse. Spectralink DECT handsets are popular in manufacturing, warehousing and healthcare industries, but are used throughout every established industry worldwide.