Need a crash course in what PoE (Power over Ethernet) is? Simply put, it’s a way to provide power to an IP device, such as an IP Phone through an Ethernet cable. The device doesn’t necessarily have to be an Internet protocol-enabled (IP) device, but it makes more sense if it is. Ethernet cables allow the transmission of data to and from a device, so PoE literally empowers the Ethernet cable to act as a power supply as well.

A PoE-enabled IP device—in some cases—does not come with a traditional AC adapter or wall plug. Many switches and routers come with PoE built into the Ethernet ports and will act as both the data and power supply for PoE devices.

PoE ports on switches and routers can act as regular Ethernet ports, sending data to and receiving data from devices, but cannot power devices that are not PoE enabled. The same is true of PoE devices; they can send and receive data, but cannot draw power from a switch or router unless that switch or router offers PoE.

Before making any purchase, take note of the specific requirements of the device. 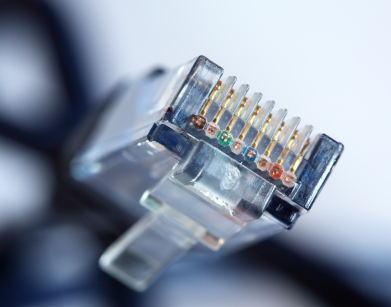 Two types of PoE exist; both are compatible with all PoE devices, but provide power through different means. There are four pairs of wires that run through every Ethernet cable, and how PoE uses these cables is what differentiates the two types.

Power is provided to the device by conducting electricity over all four pairs of wires within the Ethernet cable. Data uses these same wires, but because Ethernet uses differential signaling (a pair of wires sends complementary signals to cancel interference), the electricity does not interfere.

Although it’s not the same, PoE Alternative A is similar to how a microphone receives power and sends data at the same time.

Power is provided to the device by conducting electricity over two pairs of wires, while leaving the other two pairs alone to only transmit data. Standard Ethernet cabling only requires two pairs to transmit data, so Alternative B takes advantage of that.

USB cabling provides many of the same features as PoE, but without the same level of functionality. The following figures are only approximate estimates since some power is lost as it travels through the cabling system:

All devices are different. Determine which power source is appropriate for your IP devices before purchasing them. Consult the user manuals, specification sheets and any other included information. Visit our FAQ for answers to similar questions about IP devices and technology.