Can you use analog phones on a VoIP phone system?

If you already have a large fleet of analog phones but you want a modern VoIP phone system, do you need to replace all your phones? No.

You can integrate analog phones into a VoIP phone system using ATAs and VoIP Gateways.

In this blog, we cover the basics of what ATAs and gateways are.

ATAs & Gateways: How to connect analog phones to a VoIP phone system

To integrate analog phones into a VoIP phone system, you need a device that translates the analog phone’s signal to a signal that can be transmitted over an IP network.

This device is called an ATA or VoIP gateway. ATA stands for “analog telephone adapter.” An ATA and a gateway are the same thing. “ATA” is typically used to describe a device with only one or a few ports, like AudioCodes MP-112. “Gateway” is typically used for devices with more ports, like Grandstream GXW2416 v2. The important thing to remember is simply what the device’s core function is: it translates an analog signal into a VoIP signal and vice versa.

For simplicity’s sake, we’re just going to use gateway from here on out.

Most VoIP phone systems and cloud phone services today use the open SIP communications protocol. Think of SIP as the most common language for VoIP. If you see “SIP gateway” or “SIP phone system,” all that means is that it’s a VoIP gateway or VoIP phone system that uses SIP. A SIP gateway translates the analog signal into a SIP signal. All SIP systems are VoIP systems.

A gateway has FXS ports for integrating analog endpoints like phones and fax machines. An FXS port is the classic telephone port, like you have in outlets at home. You plug the phone into a port on the gateway. The VoIP phone system then recognizes the port as an endpoint and directs calls, faxes and so on to and from that port. You need to configure the gateway with your VoIP phone system, just like a VoIP phone.

Note that you’re not actually controlling the analog endpoint directly. An analog phone doesn’t have the internal technology to support many features that a VoIP phone can handle any more than an old-school home phone compared to a smartphone. However, you still can get an enormous number of features on the analog phone that come from the VoIP phone system, like automatic NTP time setting, encrypted communications, centralized administration through a management portal and many, many more. 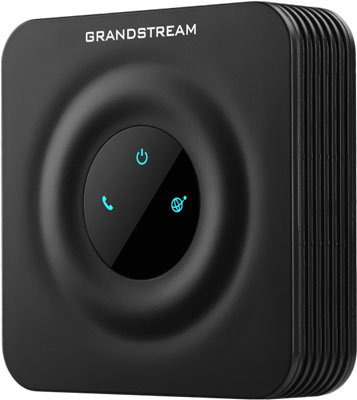 The advantages of using analog phones on a VoIP phone system

VoIP phone systems hold many advantages over traditional phone systems. They’re more versatile, simpler to manage and you have access to many, many more features. If you want to learn more, check out our expert, detailed VoIP Phone Systems Buyer’s Guide.

But it can also be quite expensive to replace all your existing endpoints. For example, a hotel might have a phone in each of its 80 rooms. Rather than replace all 80 phones, you could integrate them into a VoIP phone system using, for example, one of the newly updated Grandstream GXW4200 v2 Series High-Density VoIP Gateways like Grandstream GXW4248 v2. You’d only need two of these gateways to integrate all 80 phones, and you get support for wideband audio, enterprise-class encryption and more.

So rather than replacing all the endpoints, you just integrate them, which can add up to real savings. In return, you get a modern phone system that you can centrally manage through the network, plus all the attendant benefits.

Can you use analog fax machines on a VoIP phone system?

Yes, you can also integrate your existing fax machine into a VoIP phone system. Almost every gateway will support T.38, which is a protocol for sending faxes over VoIP. In fact, you’ll often see it referred to as “Fax Over IP” or “Fax Over VoIP.” If this is a necessary feature for you, make sure to look for T.38 support in the gateway’s specifications.