Do you need a special kind of network switch for VoIP phones?

Here’s a question we get a lot: What type of network switch do you need to connect VoIP phones to the IP network? Do you need a particular type of switch for your phones?

But there are a few considerations that are specific to choosing a switch to use with VoIP phones that we’d like to go over.

How to choose a network switch for VoIP phones

A network switch connects devices to create a LAN (Local Area Network). Here are some of the features to look for when shopping for a network switch for VoIP phones:

We end by discussing Wi-Fi and its implications for network switches.

The first question to ask when shopping for a network switch for VoIP phones is: How many ports do you require?

This is a more complex equation than you might think, because you need to figure in not only how many VoIP phones you’re going to connect, but any additional network devices, too. These might include printers, Wi-Fi access points, video conferencing devices, IP security cameras, IP intercoms and so on. You also have to factor in any future growth: Will you add phones in the future?

For example, if you have 6 VoIP phones, you might think a switch like the Grandstream GWN7801P, which has 8 ports, would be sufficient. But if you also want good Wi-Fi, a laser printer, a video intercom for the front door, room for future phones as your business grows and so on, you’ll probably want to go with Grandstream GWN7802P, which has 16 ports.

When counting how many ports you need, you’ll probably be able to count one VoIP phone plus the computer as requiring only one port.

Most VoIP phones can be powered via PoE. PoE stands for “Power Over Ethernet.” It’s a long-established standard for pushing power through Ethernet cables. It lets you power a VoIP phone (or other device) via the same cable that connects it to the network.

PoE switches have power budgets: they have maximums on how much power they can push per port and in total. We recommend checking before purchase that the PoE switch’s power budget will cover your needs. For example, Grandstream GWN7803P is a 24-port PoE switch with a 360W total power budget that can supply up to 30W per port.

Power budget is particularly important to keep in mind if you plan on using VoIP video phones, VoIP phones with large color displays or a VoIP phone with an attached expansion module to add feature keys. These may require more power than the standard VoIP phone. They may require PoE+ support, which is a different standard that allows for more power to be pushed through the cable than standard PoE.

If you want to know more about PoE, check out our blog: What is “PoE”?

When speaking of switches, QoS refers to a range of features that allows a user to prioritize specific types of data traffic to optimize and stabilize your system. For example, you might set voice and video traffic to high priority. By utilizing QoS, you can reduce packet loss, latency and jitter.

Voice calls and video conferencing are real-time applications, which means that disturbances to the flow of traffic like latency or jitter can be highly disruptive. That’s why QoS can be so important.

If you anticipate heavy network loads or if you want to establish the optimal communications system for your business, investigating what QoS options a switch offers can be very important.

Related to QoS is VLAN. VLAN stands for “Virtual Local Area Network.” As you might guess from the name, it’s a technology that recreates a LAN virtually, so you don’t need to have direct physical links between devices to have a separate system.

Without getting into technical details, a VLAN is a way of segmenting data. Data of a particular type can be tagged by the system. You can create a VLAN specifically for communications data.

Many switches support VLANs. By segmenting VoIP data traffic from your other traffic, you ensure that calls will be stable regardless of what is happening elsewhere on your network.

As with all technology, there are lots of names and features to do with switches that can be quite confusing. Four of the common words you’ll see are: managed, smart, Gigabit and stackable.

Do you need a managed network switch? Without getting into details, managed switches give you more control, more features and better security. Unmanaged switches come with a fixed configuration and are typically much less expensive. For many small businesses with simple needs, an unmanaged switch is fine.

Do you need a smart network switch? “Smart switch” most often refers to a switch that you can manage remotely via a web browser. While certainly not essential, it can be convenient to access the switch this way, especially if the admin is remote or you have multiple locations that you want on the same network.

Do you need a Gigabit network switch? In this context, Gigabit refers to the maximum speed of data traffic that a switch port can handle: 1000 Mbps or 1 Gbps. It is 10x faster than the previous standard. Gigabit speed is not necessary for stable voice calls; however, having Gigabit speed available gives you overhead to reduce network bottlenecking.

Do you need a stackable network switch? A stackable switch is one that’s fully functional as an independent device, but which also can be setup with another switch (or multiple switches) to act as a single switch. The idea is that there is a “stack” of switches that act as one device. You manage all of them together from a single IP address. Stackable switches are extremely useful for adding ports. For example, if you use four stackable switches with 24 ports each, you’d have 96 ports in total that you can manage from just one address. For large VoIP phone deployments, stackable switches can be a real asset. 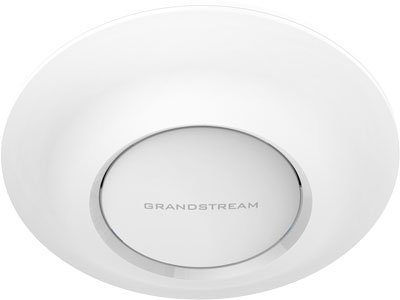 However, more and more VoIP phones support Wi-Fi, either via a native Wi-Fi radio or via a USB Wi-Fi dongle. And many people love using Wi-Fi, because it eliminates a lot of cables and lets you position the phone anywhere you have a good signal. For many people, it’s just more convenient, plain and simple.

Wi-Fi can affect your switch purchase, because using Wi-Fi for VoIP phones likely reduces the number of switch ports required. If your switch has fewer ports than you have phones, see if you can connect them via Wi-Fi. This will save you on purchasing another switch.

You’ll still need to connect the Wi-Fi access point to the switch, though, so keep that in mind. And keep in mind also that, in most cases, when a VoIP phone is using Wi-Fi, it’ll require an external power supply for power. You very likely won’t be able to power it via PoE.