The what, where and how of image sensors in IP cameras.

The world of IP surveillance cameras can be tricky to navigate. With so many technical aspects and such variety in choice, it’s hard to decide which camera is best for you. This post is going to make your job a little easier. We’re breaking down one of the most important parts of a camera: the image sensor. We’ll cover everything from what an image sensor is and how it works all the way to which image sensor is ideal for you and your needs.

What is an image sensor?

An image sensor is the part of your IP camera that takes light traveling through the camera lens and converts it into electrical signals. These signals ultimately end up as the video you see on your monitor. 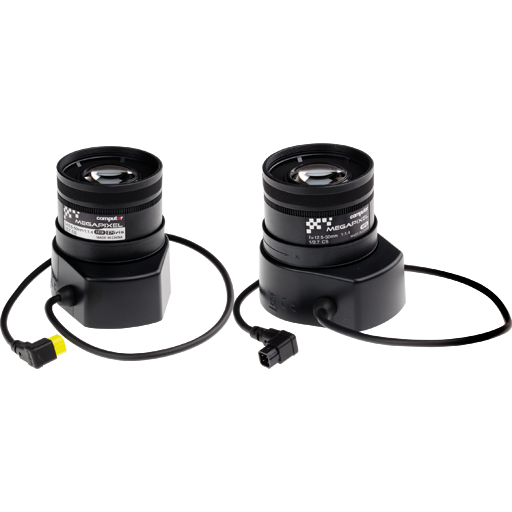 How does an image sensor work?

With a CCD image sensor, the light hitting the sensor is converted into an electrical signal and held in each photo sensor on the chip. These charges are transferred pixel by pixel through an output node to an image processor, where they are converted to voltage. The voltage is then converted to an analog signal.

CCD image sensors use external hardware to convert the analog signal to a digital signal, which is an additional step over a CMOS image sensor.

A CMOS image sensor already has circuitry at the pixel level, so every pixel on the sensor is read and transmitted simultaneously. The chip of the CMOS then uses amplifiers, A/D-converters, and other technology to convert the voltage directly into digital data. 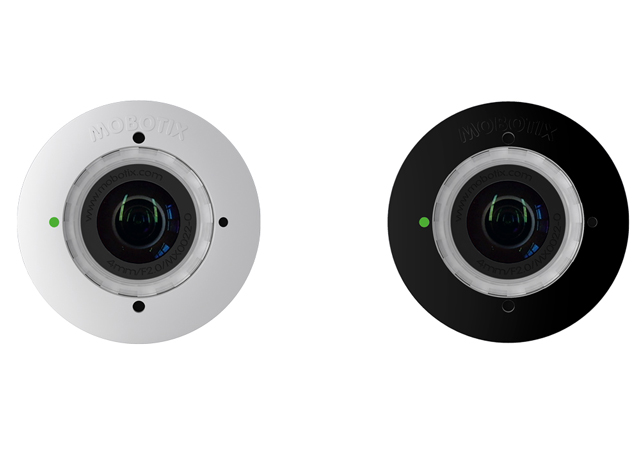 CCD image sensors are generally the more popular choice in surveillance cameras because they offer less image noise and higher light sensitivity to create higher resolution images. A camera with a CCD image sensor will also offer a much better low light performance compared to a CMOS image sensor.

The circuitry and analog components of a CCD image sensor is located outside the chip, which makes a CCD camera more expensive to produce. This can also lead to the camera overheating because the exterior circuitry requires up to 100x more power than a CMOS image sensor.

CCD image sensors can sometimes require a higher data rate compared to a CMOS image sensor because everything is going through a few (or sometimes only one) output amplifiers.

CMOS image sensors have struggled with producing quality images similar to a CCD image sensor. This is due to the fact that the extra technology crowds the pixels on the sensor and affects their ability capture light effectively. The circuitry inside the chip also leads to a risk of structured noise in images, like stripes and other patterns. 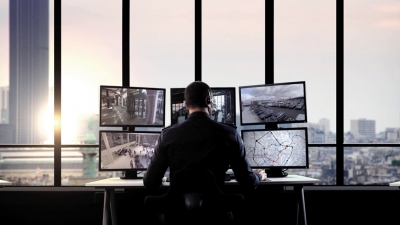 CCD and CMOS image sensors use two different types of shutters (shutter refers to the exposure method of the image sensor).

CCD image sensors use a global shutter. Global shutter works by exposing a full frame for an amount of time. It processes the entire image at once and gathers an equal amount of light. Global shutter is typically free of image distortions caused by rapid movement or flashes of light.

CMOS image sensors commonly use a rolling shutter. Rolling shutter exposes the frame by moving from one side to the other instead of all at once like a global shutter. A camera using a CMOS sensor will usually record in a rolling sweep from left to right or top to bottom. This can create more issues with image distortion.

Sensor artifacts are distortions or alterations that appear in the final image as a result of something happening during the video process. There are four types of artifacts: skew, wobble, partial exposure (exclusive to CMOS image sensors), and smear (CCD image sensors). 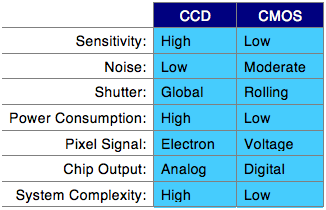 Many of the processing functions of a CCD image sensor are done outside the sensor, which leads to greater power consumption and an increased risk of the camera overheating. Compared to CMOS image sensors, CCD image sensors have a slower readout as they generally only have one charge-to-voltage converter per sensor. CCD image sensors produce higher quality images and have an impressive low light performance.

Which is better: CCD or CMOS?

CCD and CMOS image sensors have long been stacked against each other in order to determine which one is “the best.” While each sensor has advantages and disadvantages, there really is no clear winner.

The decision of which image sensor is best comes down to the needs you have in a camera.

Cameras with CCD image sensors are ideal for those looking for crisp, clear images in even poor lighting conditions. CCD cameras would be great for use in stores, businesses, or if the camera has the durability ratings outdoors.

Cameras with CMOS image sensors are great for use with multi-megapixel cameras. These cameras are great for those looking to install an entire IP camera system, whether it be in a store, factory, or business.

Keep in mind that the image sensor, while important, is only one of many factors to consider when looking at IP cameras. Consider where and how you would like to use the camera, what features you absolutely need, and which features you can do without.

Blog article contributed by a member of the IP Phone Warehouse community.