Are you wondering if the Yealink WH63 Wireless Headset for Microsoft Teams will work with your Yealink T4S Series desk phone? We answer that question in this blog so read on to find out. Figuring out what headsets are compatible with can be confusing and compatibility guides can be hard to find. 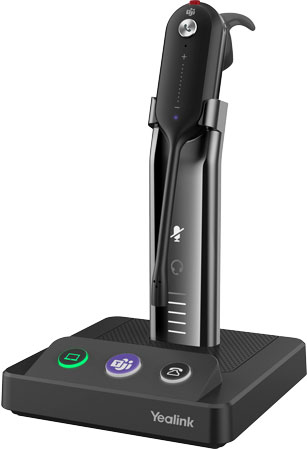 We’re here to clear the air on whether the Yealink WH63-Teams headset can be used with a Yealink T4S Series SIP phone. Many of us out here who have SIP phones also use the Teams platform on our computers. We want a solution that gives the best of both worlds. The WH63-Teams version does just that.

If you’re using a Yealink T4 Series desk phone, such as the SIP-T46S, then you’ll be able to effortlessly connect the WH63-Teams headset with a supported Yealink SIP phone and a computer running Teams. It’s recommended that the Yealink SIP phone be on firmware version 85 or newer.

The WH63 base has two USB ports for dual connectivity, one to connect to a PC and the other to connect to a desk phone. See the WH6X wireless headset user guide for additional information.

Are there any other differences between the Teams and UC version of the WH63?

So the Teams version of the headset is not just for MS Teams running on a PC or MS Teams desk phones, but instead can be used with supported SIP phones from Yealink. The same compatibility applies to the Yealink WH62 Teams headsets.