Speaking on Behalf of Paging Systems

An overview of various speaker types for paging systems.

Paging systems enable businesses to interact with employees in an instant. They have other purposes, from playing music in department stores to making an announcement in a restaurant, but businesses utilize and deploy paging systems the most. The types of paging system speakers available include ceiling speakers, wall baffles and horn loudspeakers, each with specific layout requirements and uses for optimized performance.

These speakers are hung from ceilings and pointed downwards, often arranged in a layout of multiple speakers to provide maximum coverage. Ceiling speakers are best suited for dropped ceilings or provisioned to hang from horizontal beams. Their cone-shaped form means that sound is directed towards a particular direction. Effective coverage provided by a ceiling speaker is determined by how far the speaker is from the floor and the decibels produced by the speaker.

In the above diagram, the circles represent the effective coverage of six ceiling speakers. The goal of this arrangement is to provide equilibrium between the volumes of the speakers, meaning the volume level sounds the same wherever someone is standing on the floor. 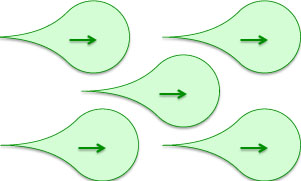 In this diagram of five deployed wall baffles, the sound is dispersed evenly, with the speakers arranged in a 2 x 1 format. The wall baffles are arranged, for example, with 40 feet of space on either side and 80 feet of space in front of them. The speakers require more room in front of them because the sound is projected forward, and the deployment is staggered to ensure greater effective coverage.

An alternative arrangement on opposing walls: 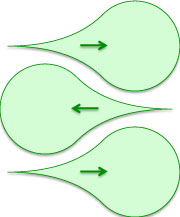 Another example of wall baffle deployment, when vertical beams or supports are not available, is to install the wall baffles into opposing walls.

In the type of arrangement pictured to the left, two sets of wall baffles are facing towards each other and they are staggered. Coverage areas are evenly distributed, allowing even volume across the floor.

These speakers are similar to the cone-shaped wall baffles, but they are primarily used outdoors, in large warehouses or in noisy environments. Horn loudspeakers are also deployed facing the same forward direction in a staggered 2 x 1 format for the most effective coverage.

A daisy chain is one set of wires that connects a series of speakers to the amplifier. Daisy chaining speakers reduces the amount of cabling required, whereas otherwise each speaker requires its own set of wires, but this technique can also overload an amplifier that isn’t rated for such a load. Daisy chains can be utilized with a 70V system and is not recommended for anything less than that output.

Installing volume controls on speakers allows them to be muted should one no longer become necessary. For example, a paging speaker installed over a control desk or in an office may not always be necessary, or if the layout of a building is changed then the paging system does not need to be fully disassembled to go along with it.

In a very noisy environment, an 85 to 95dB speaker is generally most effective to a range of 25 to 50 feet. Decibel level and coverage depends on wattage, which is usually 15-30W.

In contrast, in a softer environment, a 55 to 65dB speaker is generally most effective to a range of 100 to 200 feet. Again, decibel level and coverage depends on wattage, which is usually 5-7.5W.

A high decibel speaker may be too loud for a low noise environment and can adversely affect the effective coverage.

The types of paging systems available include central-amplified and self-amplified systems. Central-amplified systems include one main amplifier, powerful enough for a large system with an average power output of 70 volts. This type of amplifier is usually not cost efficient for a small system and is more ideal for daisy chaining a series of speakers. Self-amplified systems include speakers with their own built-in amplifiers that require additional power supplies and cannot be daisy-chained. This system generally requires a lower power output, at 24 volts, ideal for small systems.

Survey the type of speakers your building can support and the available options for each. Determine which amplifier system and arrangement of the speakers is best. There are many advantages to a paging system, but they can only be fully realized with the correct design and deployment.